“Whiteboard animation” videos are an effective media format to communicate ideas and enthrall an audience. Instead of simply watching a “talking head” video showing a speaker giving a presentation, recorded audio is synchronized to hand-drawn illustrations relating to the topics being addressed. These videos can be created by professional artists and video production teams or by amateurs. Two of the author’s favorite professional examples are “Where Good Ideas Come From by Steven Johnson” (@stevenbjohnson) and “Changing Education Paradigms” by The RSA (@theRSAorg) using a presentation by Sir Ken Robinson (@SirKenRobinson).

There are several ways to create whiteboard animation videos, or “narrated sketchnotes.” These include:

Some drawing and sketching apps for the iPad support sharing via “video export.” These videos are time lapse videos which replay the drawing sequence used to create an illustration. Pro Create ($6) is one iPad app which supports video exports.

This is an example of a recent sermon sketchnote the author created using Pro Create ($6) for iPad. 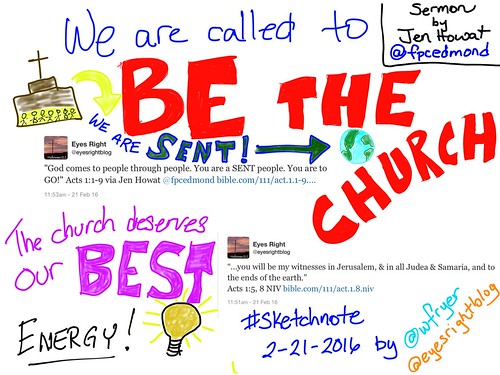 This is a March 2015 example of a sermon sketchnote the author created during a Sunday message on Genesis 1:28 by Pastor Jen Howat at First Presbyterian Church of Edmond, Oklahoma. This sketchnote was created on an iPad using the free app Forge. 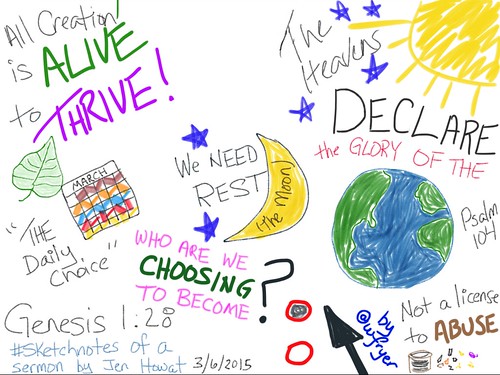 After the church service was over and the eldest son was driving as a chauffeur, the author recorded a three minute “narrated sketchnote” using this image. This was created on an iPad using the app “Explain Everything.” By moving around to the different parts of the illustration, a “sketch tour” can become more visually interesting to watch than a simple “narrated art” project which uses the same image (without zoom effects) during an audio narration.

iPad apps, software programs and websites are available which can simplify and streamline the process of creating whiteboard animation videos. VideoScribe Anywhere (free, with in-app purchase options) is a powerful iPad app which comes with hundreds of pre-drawn graphics. Users can record a script and then select available graphics to use in a “sketch replay” mode. Users choose the location and size of graphic objects, and build a collage of images similar to the way presenters can make a Prezi presentation.

The author created the 1 minute, 40 second narrated sketchnote video, “Why Become a Storychaser?” in 2013 using an older version of the VideoScribe iPad app.

Other software options to create narrated sketchnote videos include:

A fourth way to create narrated sketchnote or whiteboard animation is to video record your paper and your own hand as you create an illustration, and then add voice narration to it later in your video editing software. This 2014 MakeUseOf.com post describes the steps and equipment required to do this. The author of that article created an example timelapse drawing video by speeding up video playback by 8 times. Lots of factors will contribute to the total time required for a project, but this option is likely to be the most time consuming of the four alternatives presented here. For traditional illustrators who like to draw “the old fashioned way,” however, it may also be the best choice.

Recent Comments in this Document